Truth and Happiness with Gary Null 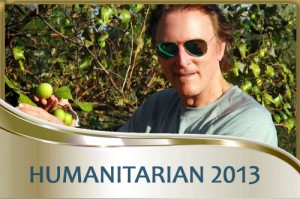 Whether he’s tackling the evils of “Big Pharma” drug companies who lobby the FDA, government-mandated vaccinations rumored to encourage autism, unhealthy GMO’s forced on unsuspecting consumers, or the effects of nuclear waste from power plants, Gary Null is committed to forcing important issues into the limelight. As an outspoken advocate for human rights, he’s made over 100 documentary films mostly about controversial health issues.

Born in 1945 in Parkersburg West Virginia, Null credits his father with enlightening him at an early age not to become just another mindless follower. “I’m an inventor and an artist,” he says, explaining how he produced over 100 inventions before he was 15. “I used to daydream all the time,” he continues. “Today, I’d be on Prozac and sitting in some psych ward simply because I found life outside the classroom more enriching than within.” Null says his father also advised him he had only two choices after high school graduation. One was working in the shovel factory where most of his relatives labored; the other was taking on the world.

After attending a two-year business college, Null declined the path he saw most of his friends opt for: job, marriage and kids. Instead, with $7 in his pocket, he took a Greyhound bus to New York. After going to a restroom to wash and shave, Null put on his jacket and discovered he’d been robbed of all his money. Reassuring himself that the theft was all part of the new beginning he’d wished for, he decided that no one was ever going to “dis-empower” him. Null still remembers that night, sitting on a rock in Central Park across from the Plaza Hotel, and listening to Tom Jones singing What’s New, Pussycat? “The next day,” he says, “I began my journey in New York.”

For $2.50 daily, he rented a room at the YMCA washing the clothes at night he had worn during the day. Before long, he became an investigative journalist. With no background as a reporter, he says he “simply looked for the truth”.

After writing for three months, Null was finally published. He wrote for the first consumer advocate publication at the time, Caveat Emptor, but wasn’t paid. Then, he met a writer who introduced him to an agent at Writers Literary where he ended up working five days a week. In return for one day of toil, the agent worked on Null’s manuscripts. Unaware of her background, Null says he later discovered she was a feminist and political activist with numerous well-known connections. On most nights, her friends would gather at her Bancroft Hotel apartment where, Null recalls, he would “listen and learn more about what politics was early in the twentieth century.”

Later, they’d attend the New Yorker Theater at 89th and Broadway to watch art house films. Knowing his financial situation, the owner bartered with Null to clean up the theater in exchange for watching a free movie. Null also regularly visited a bookstore in the area where, because he had no money, he’d read one book per night.

Through consumer writing and ghostwriting for “some famous people”, Null remembers earning about $2,000 a year. In 1971, when he wrote a book about surviving New York on a shoestring budget, Null was offered $50 for it by a publisher. He then began writing self-help books going after the cosmetic and meat industries and their overuse of hormones. Today, Null has over 70 books in publication.

He launched his own radio show, now the longest syndicated program focused on health. Then he began making films about socially relevant issues because, he says, the ones he saw were “too careful”. “No one wanted to offend anyone,” he explains, “especially sponsors.” According to Null, money is the motivation for a lot of filmmakers, but his is a higher purpose. “I wanted to tell the truth,” he says although he remembers, “the blowback was tremendous” with a hate campaign lobbed against him.

Null maintains, “I never allowed myself to be exploited or exploit others.” So, he decided to finance his films himself and air them publicly. “I don’t sell my films,” he says. “I could have. I’ve been offered film distribution, but they want you to compromise, and I don’t want to compromise.”

Although PBS has broadcast over 50 of his specials, Null has never studied filmmaking. “I really don’t have a background in film,” he admits. “I never took a class in filmmaking, or writing, or environmental sciences or human activism or social issues.”

He has, however, won numerous awards, five hundred by his count. Although he acknowledges gratitude for the recognition, he’s not motivated by it and appreciates it for the attention it brings his films. “I’m getting people to stop and look, to live in reverse,” he says.

Suggesting that we should all “completely surrender all the distractions for the day”, Null says that his “goal is to get people to think ‘we’ not ‘me’ by stopping the repetition and recycling of daily rituals that keep us disconnected from each other. “Sharing with people is important to me,” states Null who doesn’t charge for lectures or counseling.

He may have grown up living in a trailer, he says, but that doesn’t mean he was unhappy. “I had a very humble background, but I didn’t feel poor,” he explains. “My mother said the fact we don’t have material things doesn’t mean we’re poor. We have the love of our family and faith.” Although Null wanted to buy her a house, she deferred, telling him, “My heart and soul are happy.” And, so it appears, are her son’s.

To learn more about Null’s work go to www.garynull.tv.