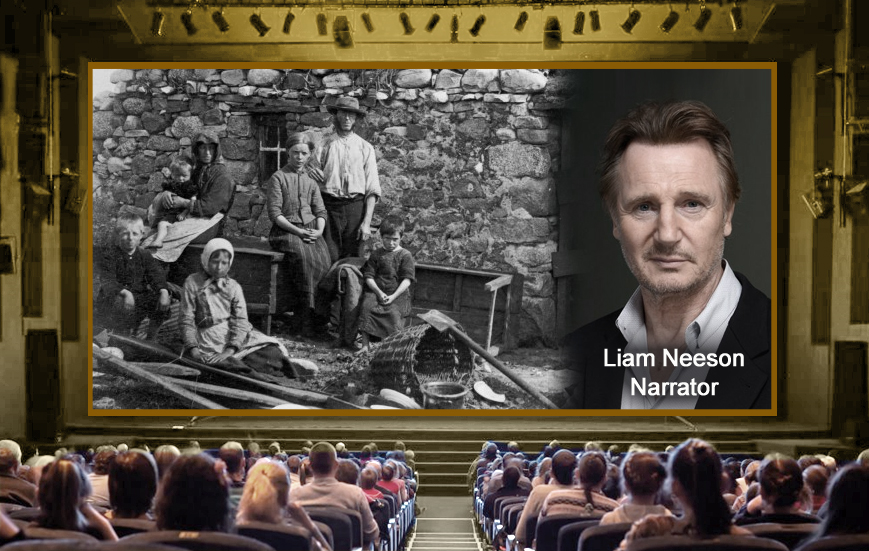 Ruan Magan (Ireland), The Hunger, Doc Feature – Narrated by Oscar-nominee Liam Neeson – this is a meticulously in-depth story of the great Irish famine of the 1840’s and the extraordinary circumstances, policies and belief systems that shaped it. Deftly directed with eye-opening new research, it reveals how the crisis was a manifestation of class struggle and how British authorities, the landed gentry and the Irish Catholic middle classes each contributed to the tragic fate of the millions who suffered and died. It is an extensive examination of the sheer horror of the Great Famine, how the calamity was tragically preventable, as well as an exploration of the complex questions of its aftermath one of the worst humanitarian disasters of the 1800’s. With a gorgeous score by Natasa Paulberg and creative editing by Keith Walsh. Presented by Tyrone Productions and Create One with RTÉ and ARTÉ, in association with University College Cork and the Atlas of the Great Irish Famine. Aired on RTÉ

Cinzia Angelini (USA), Mila, Animation – Award-winner industry veteran Angelini (Spider-man 2, The Minions Movie) delivers a heart wrenching story of war from a child’s perspective. Inspired by World War II stories from her mother, Mila represents the best of humanity. Although she has lost everything – she still clings to hope profoundly impacting others. With a beautiful soundtrack by Flavio Gargano.

Nickolas Bird and Eleanor Sharpe (Australia), Phil Liggett: The Voice of Cycling, Doc Feature – A fascinating insider’s look at fifty years of professional cycling and an intimate portrait of the gentleman whose passion and quiet charm has come to personify the sport. A fitting tribute to Liggett’s legacy and  insight into his dedication to his much-loved sport and his passion for wildlife conservation.

Gudmund Helmsdal (Faroe Islands), Brother Troll (Trøllabeiggi), Film Short – In the 1800’s Faroe Islands, two brothers struggle to save their relationship after the loss of their sibling. Lush cinematography captures a coldly beautiful environment, a backdrop for the harshness of life and the icy yet bonded brothers. A unique fable with a twist. Deft direction, melodious soundtrack and authentic performances from Búi Dam and Nicolaj Falck.

Delphine Montaigne (France), Out of Time, Film Short – Felix’s behavior has caused the director to summon his mother and threatened to deny him the access to the establishment. The real story unfolds in a heart-breaking and heart-warming ending.  With touching performances by Laurence Côte (Thieves), Gerard Dessalles (The Legend of Zelda: Breath of the Wild), Marie Bray ( Don’t Read This on a Plane) and Nadir Benlala.

Ravishankar Venkateswaran (India), Punyakoti, Animated Feature – The first Sanskrit animated feature about a village, environmental destruction and a noble cow. She faces drought, human avarice and a hungry tiger in this fable based on a children’s book and Kannada folk song. A poignant tale about the struggle between human greed and nature’s harmony. Creative animation and an energetic soundtrack. Stars: Revathi and Roger Narayan.

Camilla Roman (Norway), Waves, Film Short – In the middle of the COVID-19 lock down, asylum seeker Leyla meets Stig, a delivery guy, an encounter that could change both their lives. A poignant, heart-wrenching cautionary tale for our times highlighting the tragic consequences of refugee lives and deportations. With authentic performances by Tonje Thwin (Bloodride / Witch Hunt) and Eric Vorenholt (The Kings’s Choice)

Shahriar El Kosht (Canada), The Reminder, Web Series – After a car accident and walking for hours in the middle of the Quebec forest a man finds shelter in an abandoned cottage where a series of unexpected events will put his sanity to test. A gripping web series with a surprise ending featuring an intriguing performance by Shahriar El Kosht (El Tiempo del Agua).