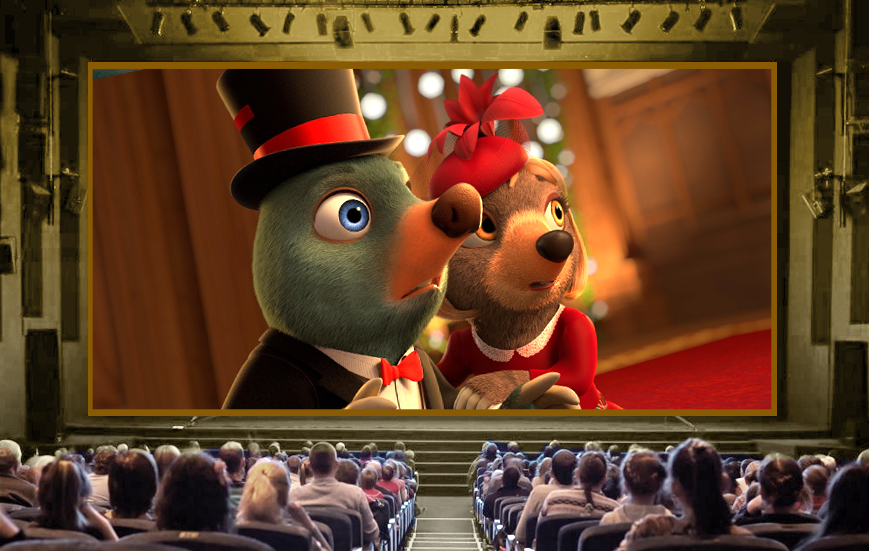 Leon Joosen (United Kingdom), Master Moley By Royal Invitation, Animation – The story of a precious young Moley, an ancient magical book and an adventure to pick a rose from the Queen’s Garden. These events not only change Moley’s life – but the lives of all the Moles. This thoroughly engaging and utterly charming animation is filled with beguiling characters and a delightful story line. A 30-minute special easily lending itself to a series or feature – filled with adventures kids will love with plenty of witty  humor adults will appreciate. Deftly directed by Joosen whose talent was minted at Disney as an animator on Little Mermaid and other projects, and directing (under Roy Disney) on Scooby Doo and Aliens in the Attic. Moley was written by Ricky Roxburgh (Tangled: The Series and Arthur Landon (Side by Side) and brought to life by a stellar cast of industry talents. Two-time Oscar nominee and BAFTA winner Julie Walters (Billy Elliott, Mama Mia), Oscar, Golden Globe and BAFTA-nominee Richard E. Grant (Can You Ever Forgive Me?, Gosford Park), Emmy and BAFTA-nominee Charles Dance (Game of Thrones, The Imitation Game), BAFTA-nominee Gemma Arterton (The Escape), BAFTA nominee Togo Igawa (Thomas and Friends, Star Wars) and prolific popular performer and producer Warwick Davis (Harry Potter Series, Return of the Jedi, The Last Jedi, Rogue One).

Nick Epstein (New Zealand), Die Like a Shark, Film Short – An ageing fighter falls apart as he refuses to face the end of his bright career. An emotional ride through the depths of feelings, bad decisions and harsh realities of a fighter and those that love him. Skillfully directed by Epstein (The Hobbit, Harry Potter) stars SAG-nominee Shane Rangi (The Wolverine), Mark Hadlow (The Hobbit) and Jed Brophy (Lord of the Rings).

Rami Ghorra, SAE Institute Paris (France/Lebanon), The War of Others, Film Short (Student) – Twenty years after Lebanon’s Civil War, a warlord enters a barber shop in Paris and faces the family of some of his victims. An affecting ride through the psyches of victims and perpetrators. Excellent direction and compelling performances. Farouk Benalleg, Sebastien Corona, Christian Vurpillot and François Rousseau.

Fabio Teriaca and Juan Pablo Etcheverry (Italy), Twelve Minutes of Rain, Animation – A beautifully poetic animation that follows a protagonist as he returns to the places of his childhood and relives the memories that characterize his existence. Deft direction leads creative animation and heart-warmingly relatable story with a beautiful and emotional score by Sergio Cammariere.

Radheshyam Pipalwa (India), SMASH (Chidi Balla), Children/Family  – A humble tale of the indomitable human spirit and the boy who saved a village school (and the soul of the villagers!) through learning and mastering the game of badminton. Well directed with attractive cinematography, a supportive soundtrack and enjoyable performances from an ensemble cast. Chetan Sharma, Abhimanyu Singh, Suneel Sinha, Mayur More.

Stanley Black & Decker (USA), Together We Are More: Celebrating Differences for a More Inclusive World (Pride 2019), Special Purpose Productions – Celebrating Pride 2019 and a corporate value of embracing and valuing all aspects of diversity. An excellent corporate piece set to a lyrical poem with compelling images, approachable narrative and superbly edited to an inspiring soundtrack.

David Sipoš (Slovenia), My Heart is not Afraid, Christian – The life of martyr Alojzij Grozde, from his poor childhood in Dolenjska to his life as a student and finally his tragic death. With lush cinematography, expressive symbology and exceptionally creative production design. Interviews and dramatic re-enactments provide a cautionary tale for our times and persecution of others. Stars Alex Centa.

Jackson Little (USA), Static, Film Short (Young Filmmaker – 17 and younger) – A businessman under pressure working at home, finds himself facing a series of strange occurrences while waiting for his wife to come home. With direction and suspense more sophisticated than his 17 years, Little shows great promise for a filmmaking career.

Brian Follmer (USA), Out of Sight, Out of Mind, Film Feature

Gabe Schmidt (USA), How to Make a Movie, Young Filmmaker – 17 and younger

Julio Mendez (USA), TOGETHER WE CAN, Documentary Short