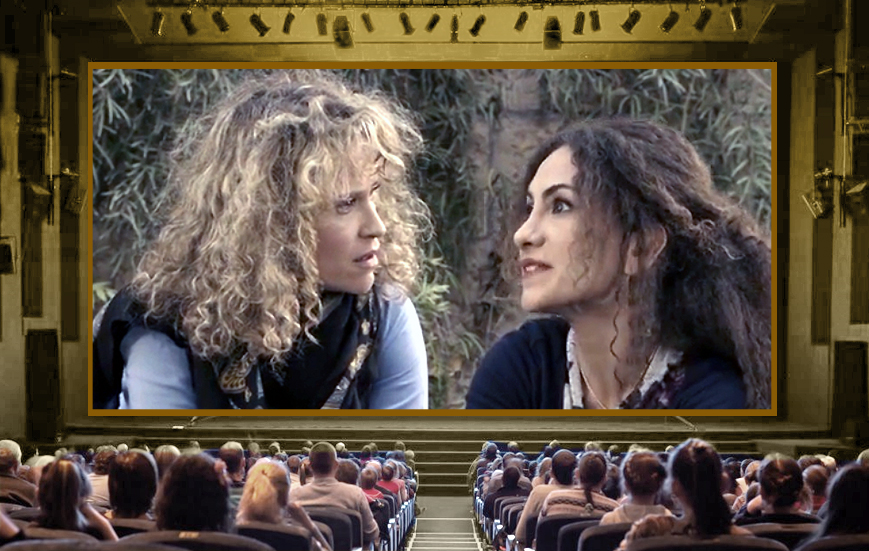 Tzipi Trope (USA / Israel), My Dearest Enemy, Film Feature – A powerful drama set in the Jerusalem neighborhood of Abu-Tor; a community that is half-Jewish and half-Arab. It follows the twenty five year relationship of Maya, a Jewish girl and Alice, an Arab girl. Drawn to each other by their shared love for poetry, they develop a deep bond that grows into an impossible friendship. Taking two very different paths in adulthood – the film spans over 25 years as they struggle to keep their friendship in the midst of their communities’ ever-growing conflict. Both women must now choose between friendship, duty, and the pull of history. This is a story of love, betrayal, shattered dreams and courage. Deft direction and achingly authentic performances realistically present the complicated and heart-breaking realities of today’s times. Stars: Hanan Hillo (Just for Today, Fauda), Adi Gilat (The Arbitrator, Consolation) and Adeeb Safadi (Between Heaven and Earth, The Reports on Sarah and Saleem).

Roberto Flores Prieto and Iván Wild (Colombia), Men of God, Television Program / Series – A television series that features six multi-genre stories about the ironies of destiny, the mysteries of faith and the narrowness of the path that leads to salvation, through encounters between priests and parishioners in different times of the Colombian Caribbean. From an ordinary businesswoman, a hit-man and a fortune teller, to a werewolf or conqueror Pedro de Heredia, all of them have a place in the Lord’s vineyard. An exceptionally poignant and thought-provoking script, beautiful cinematography and pitch-perfect performances by the entire cast. Stars: Manuel Navarro (Sevillanas de Brooklyn), Julio Sánchez Cóccaro (Enfermeras), Victoria Hernandez (La Usurpadora), Jairo Ordonez (All for Love), Carlos Serrato and Hernán Méndez.

Sebastien Cascio (France), Promise, Film Short – Franck is interned in a psychiatric hospital following the death of his love, his wife Rachel. His psychiatrist probes his memories to help him overcome his trauma. Superb story-telling, beautiful filmmaking craft and outstanding performances deliver an impactful story. Directed by and starring Sebastien Cascio (Truands) with Priscilla Lopes (Camping Paradis) and Ines Bonson.

Jin Jin (China), The Fairy Dream of Yeloli, Asian – Multi-talented Jin Jin delivers a wildly colorfully and creative animation with epic characters – that has a deep purpose – helping children to know they are the future and the only hope to save the world and the environment. Fanciful figures and compelling stories are designed to keep interest and foster discovering truth, goodness and beauty.

Carlos Iglesias (Spain), Ispansi! (Spaniards!), Film Feature – This beautifully crafted film follows a woman from a loyalist family and a communist man who meet while traveling with a convoy of children sent to the Soviet Union amidst the Spanish Civil War. With exceptional performances by a talented cast led by Esther Regina (The Night Manager) and Carlos Iglesias (Crossing Borders) who is also the film’s writer and director.

Tom Dauer and Whiteroom Productions (Austria), The Value of Time, Doc Short – An exceptionally crafted and wonderfully engaging doc about charismatic Hermann Huber – a successful business leader, inspiring role model and legend of the alpine mountaineering world. Even in his 90’s he exudes enthusiasm and drive.  Pitch-perfect interviews, outstanding craft and story-telling with exceptional editing and sound design.

Aidan Otene Dickens (New Zealand), The Old Man Next Door, Aboriginal Peoples – A war veteran with PTSD and agoraphobia can’t leave his home. His isolation shatters when a shy student moves next door and he must witness to her decent into madness. Excellent performances and impactful flash-backs create a realistic and gut-wrenching film. Lawrence Wharerau (Colonial Combat, Xena: Warrior Princess) and Emilie Hope.

C.G. Ryche (USA), Freedom, Music Video – Emmy-winning Ryche, director and talented musician, delivers a story about Freedom, life, love, choices and how the circumstances of lives shape our destinies. Set against the backdrop of a hard-hitting song – it illustrates that freedom is about the bondage that keeps people from the life they seek…both spiritually, personally.

Julia Lemark and Julia Trautwein (Russian Federation), The Emigration, Film Feature – Kostya, an upstanding citizen with a successful career decides to help a friend and play drug mule for a day – delivering packages to friends he already knows. Things take a turn when he finds a run-away 7-year-old boy in dinosaur pajamas in the back of his car – who refuses to leave him. What could possibly go wrong?